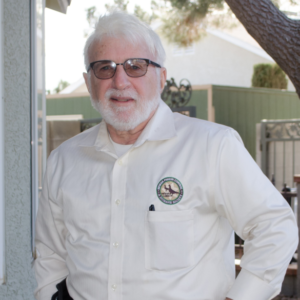 Born and raised in Philadelphia, PA. I attended the Pennsylvania State University and graduated The Pennsylvania Institute of Technology in 1962. I worked as an Architectural Designer and Draftsman. I pioneered a group travel charter program to Las Vegas, Disneyworld and the Bahamas from Philadelphia and other northeast areas as Travel Rite, LTD. in 1972. I performed many functions, especially Operations Manager for all trips and Sales Manager for the sales force. I Left the travel business in 1980 to establish Galaxy Video Distributors, a video sales & distribution organization.

I became a part owner and Executive Director of Northeast Preparatory School, a private High School in Philadelphia from 1982 until I retired and moved to Las Vegas in 2007. I began working for Nevada Pigeon Control as the Community Relations Officer at the company’s inception in 2008. I continue working as the Accounts Manager for Airborne Control Services, formerly Nevada Pigeon Control I proudly served in the Pennsylvania Army National Guard from 1964 -1970 and retired as a Staff Sergeant.