At what point do pigeons constitute a “problem” on your property?

Pigeon populations typically grow at a rate of 30-35% per year (or faster in warmer climates). And because they don’t migrate you can expect every newly hatched pigeon to join the flock it was bred into.

One pigeon generates about 25 lbs. of droppings per year. That means it only takes 80 birds to generate 1 ton of droppings in a relatively short amount of time. Why are the droppings such a big deal? Other than being unsightly and putrid, pigeon droppings are comprised primarily of uric acid. That acid can dissolve metal, paint, and even concrete. The more droppings on a property, the more destruction that will amass every year it goes untreated. 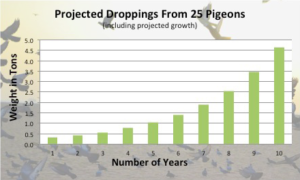 Pigeons rate of population growth can be overwhelming: 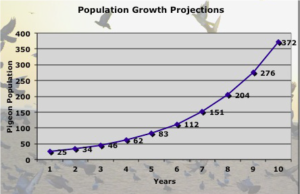 Histoplasmosis is a disease caused by a fungus that grows in pigeon droppings. It also grows in soil and is found throughout the world. When cleaning droppings a person may breathe in some of the fungus, which in cases of high exposure can cause infection. Common activities such as cleaning off windowsills will not result in high exposures.

Symptoms of histoplasmosis begin to appear about 10 days after initial infection and include fatigue, fever, and chest pains. Most people, however, do not show any symptoms. Those with compromised immune systems such as cancer patients or people living with HIV/AIDS are generally more at risk of developing histoplasmosis. The disease cannot be transmitted from person to person.

Cryptococcosis is another fungal disease associated with pigeon droppings and also grows in soils throughout the world. It is very unlikely that healthy people will become infected even at high levels of exposure. A major risk factor for infection is a compromised immune system. According to the US Centers for Disease Control (CDC), nearly 85 percent of cryptococcosis patients are HIV-positive.

Psittacosis (also known as ornithosis or parrot fever) is a rare infectious disease that mainly affects parrots and parrot-like birds such as cockatiels and parakeets, but may also affect other birds such as pigeons. When bird droppings dry and become airborne people may inhale them and get sick.

In humans, this bacterial disease is characterized by fatigue, fever, headache, rash, chills, and sometimes pneumonia. Symptoms develop about 10 days after exposure. Psittacosis can be treated with a common antibiotic.

Since 1996, fewer than 50 confirmed cases were reported in the United States annually. In New York City, psittacosis is very rare with less than one human case identified each year. According to the CDC, about 70% of infected people had contact with infected pet birds. Those at greatest risk include bird owners, pet shop employees, veterinarians, and people with compromised immune systems. No person-to-person cases have ever been reported.

If you are worried about E. coli infections from under-cooked meat and contaminated vegetables, you should also be washing your hands whenever you spend time in a pigeon-rich environment.

We think of these as being food-borne illnesses, but the Salmonella and Listeria bacteria are also carried by pigeons. These diseases are no joke: Listeria is particularly dangerous for pregnant women and babies, as it can cause “meningitis in newborns, abortions, premature delivery, stillbirths, and death.”

Toxoplasmosis is usually associated with cat feces. The parasite that causes this nasty disease (Taxoplasma gondii) however can be found in just about every warm-blooded creature. Again, this disease rarely shows in those who are healthy and strong, as their immune systems keep the parasite from causing an infection. And studies have shown as many as one third of the population carry the parasite. The problems occur in the people with weak immunity and especially pregnant women. Mothers-to-be can transmit the infection to the child.

Candidiasis is a fungus infection. It’s widely spread by pigeons and affects the skin, mouth, and respiratory system of the infected person. The intestines and the urogenital tract get affected as well and is more common in women.

Birds do not urinate. Instead, they excrete uric acid as part of their droppings. Uric acid, which is the white part of a bird dropping, is corrosive to many building materials. It may also be converted into other corrosive chemicals by environmental interactions. Microbes growing in bird droppings can create additional acids that break down building material surfaces.

Concrete–droppings readily stain concrete, but more importantly, experiments have found that bird feces damage concrete, presumably by leaching into micro-cracks and causing the concrete to weaken and erode. Long-term accumulation of bird droppings has been implicated in damage to buildings and structures resulting in potentially thousands of dollars of repairs. Cleaning up the pigeon droppings is expensive in itself and can cause additional damage to exterior and interior surfaces in the process.

Build up of feces can sometimes be almost impossible to comprehend. However, roof systems generally wooden truss are engineered to carry a specific weight load safely meaning the weights of A/C units, make up air units and anything else specific to a building roof are factored into the load calculations (yes I spent years in construction-however pigeon fecal matter is never part of the mathematical equation in the engineering process) So, imagine this same roof structure with large sheets up to a few feet deep of dry pigeon feces not an immense weight concern in dry form but when it rains all bets off issues will arise! These feces will clog up roof drains extremely essential for minimizing excessive weight loads of just water but plugged drains with fecal material unable to drain water? that could lead to a catoptric roof system failure at the worse but roof leaks would be best case situation. If your lucky and your drains operate as designed you still have an issue with all the pigeon’s feces acting like a sponge and soaking up the water and raising the weight load many times greater again placing strain on the roof system while creating a perfect environment to grow all the nasty disease associated with it.

Personally, I strongly feel pet pigeons in a well-cared for loft that pose no issue to neighbors our business allowed to get out and fly exercise then return back to there loft, I believe Clark County Title 10.36.030 States: Racing or homing pigeons may permit the same to be exercised in free flight for not more than one hour daily; provided, that all other times such pigeons are confined appropriately; for pigeon hobbyist is 1 hour per day and under these conditions is a non-issue for the community. However feral pigeons are just not a good situation period anywhere anytime there not even native to North America actually. evasive species competing with native wildlife for resources it’s the sad truth and urban settings just promote their existence 100-fold. 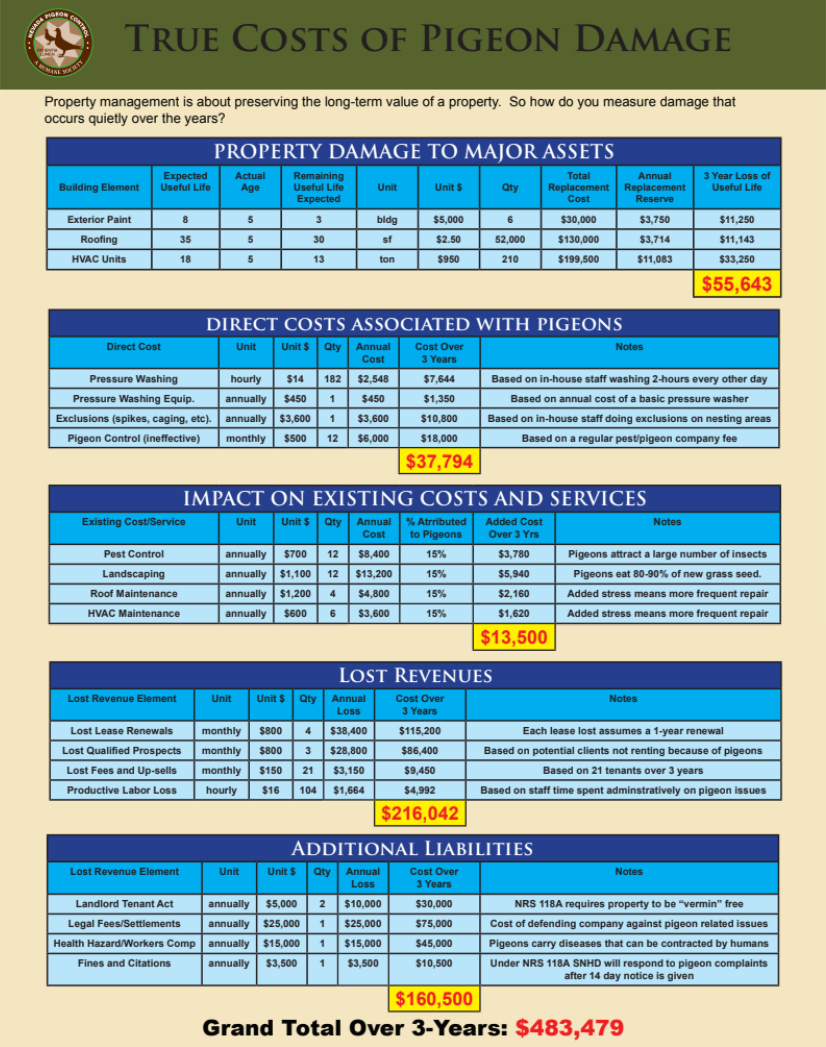