What is a pigeon? What most people in urban settings picture in their minds is officially the rock dove (Columba livia) aka feral pigeon, which is an invasive species not native to the United States. They are one of over 300 species of bird in the family Columbidae that includes doves, pigeons, and even famously extinct species like the Passenger pigeon (Ectopistes migratorius) and the Dodo (Raphus cucullatus).

The Rodrigues solitaire (Pezophaps solitaria), pictured here in a drawing by François Leguat from 1708 is “the only illustration of this species by someone who observed it alive” and was most closely related to the dodo. source: From Wikipedia.

The terms pigeon and dove are sometimes used interchangeably, and from popular culture (at least in the United States), “dove” usually refers to a white bird or a much smaller bird than the word “pigeon.” (Fun fact: white “wedding doves” are actually white homing pigeons! While domesticated versions of Eurasian collared doves do come in solid white–think of a magician’s birds–they do not possess the same intense homing instinct that pigeons do. This makes it much easier for a pigeon handler to safely release a flock of white homing pigeons from a wedding venue and be confident that they will all make it safely back to their loft.)

For example, the Eurasian collared dove (Streptopelia decaocto) is not protected in the Migratory Bird Treaty Act of 1918 because it is an invasive species not native to the United States, but the mourning dove is protected outside of hunting season which requires a hunting permit, and they look very similar to one another to an untrained eye.

“The statute [the Migratory Bird Treaty Act of 1918] makes it unlawful without a waiver to pursue, hunt, take, capture, kill, or sell birds listed therein as migratory birds. The statute does not discriminate between live or dead birds and also grants full protection to any bird parts including feathers, eggs, and nests. Over 800 species are currently on the list.” See “Other Services” for exceptions to these rules.

Pigeons are found over most of the world. 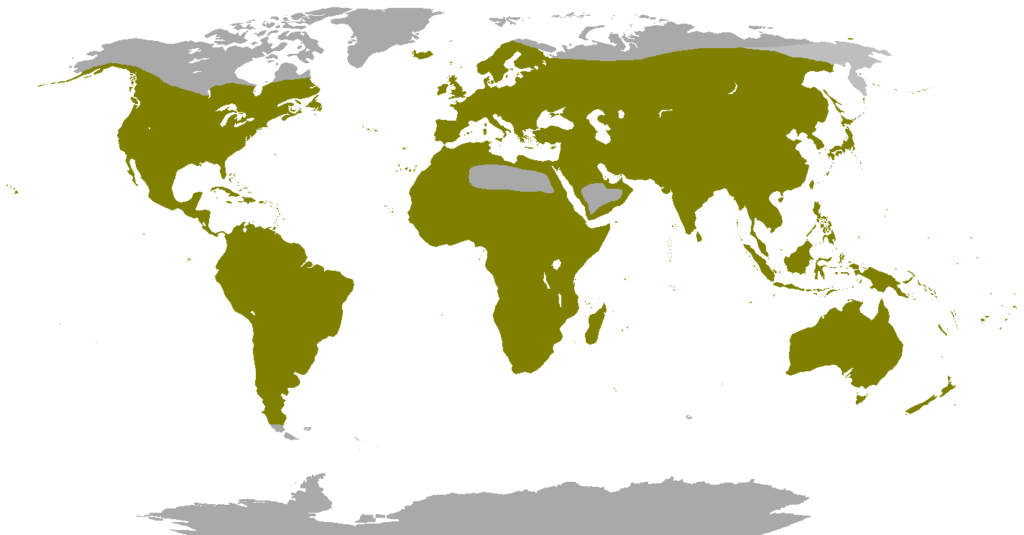 Pigeons mate for life (unless separated) and are notoriously opportunistic when it comes to nest building. Feral pigeons will nest in just about any corner, on any ledge, under your solar panels or A/C units, in attics, and even in billboards if there is a flat enough area with shelter. Pigeons will build nests out of sticks, pine needles, feathers, and other debris and use the nest over and over again, even as it accumulates piles of dried feces and maybe even carcasses of previous tenants or deceased young.

They will usually have two eggs per clutch and the chicks will hatch in approximately 18-20 days. Young pigeons, aka squabs, grow very quickly partially due to both parents producing “crop milk,” a high-fat, high-protein substance that they regurgitate to their babies to help them grow quickly and fledge within just a few weeks time. Even if the babies are not fully independent, just by stepping out of the nest this allows the parents to lay a new clutch of eggs.

A single pair of pigeons can produce as many as 12 babies per year depending on the weather and availability of food, water, and shelter. Female pigeons are fertile and can have their own first clutch of chicks in as early as 6 months and can breed for about 10 years, even though they could live as many as 30 years if cared for properly (or very lucky!) All of this means that one pair of pigeons can turn into one hundred in approximately two years if left unchecked.

Magicians often use white Eurasian collared doves for their acts because of how easily they can be handled. When cared for properly their cages are no more difficult to maintain or no dirtier or disease-prone than any other type of household pet bird. Their cooing and noises are often described as “soft” and “pleasant,” and are certainly much quieter than parrots in any case!

Pigeon racing is a sport practiced around the world from a hobby/amateur level all the way to professional and even international levels. Some birds may take prizes as high as a million dollars just like a race horse. Racing pigeons are built for speed and endurance and can travel hundreds of miles back to their home loft after being released in a set location by race officials.

The average speed of a racing pigeon can be over 90 miles per hour even in races hundreds of miles long. People who race competitively are likely to be the most meticulous about their birds’ health and safety as well as practice the best hygiene and maintenace for their lofts. Pigeons are vaccinated, treated for common fungal and bacterial infections transmitted by feral birds, are given clean water on a daily basis, and are fed food specially formulated to keep them strong and healthy.

In fact, Dave Kanellis, Chief Operations Officer of Airborne Wildlife Control Service first kept racing pigeons when he was a teenager and he and his wife, Civon, currently have a healthy flock right here in Las Vegas. See our “Photo Gallery” for more pictures of our birds, including a very rare natural pigeon-Eurasian collared dove hybrid that we trapped several years ago.

In Las Vegas a new ordinance was recently approved by the county commissioners that makes it unlawful to feed or in any way encourage feral pigeons to congregate, loiter, or roost in a public or residential area with a penalty of up to $1000 and/or 6 months in jail. However, Clark County Title 10 Chapter 36.030 says, “a keeper of racing or homing pigeons may permit the same to be exercised in free flight for not more than one hour daily; provided, that all other times such pigeons are confined appropriately;”

Feeding feral pigeons is a past time enjoyed by many park-goers all around the world. (photo of man feeding pigeons in the park.) Their tameness or habituated comfort around humans in certain settings could be considered endearing to a passer by or a customer eating in an outdoor food court. Even though one may think that throwing a French fry or two down for a feathered beggar might not be a big deal, in reality they are collectively contributing to the overall problem.

A pigeon’s diet in the wild is mainly seeds, but in some urban settings pigeons dine on an unnatural food source of scraps that people make easily accessible. (picture of pigeons eating McDonald’s trash in parking lot.) This overabundance of food, combined with an overabundance of water (fountains and swimming pools), and plenty of man-made shelters (billboards, hotel signs, eaves) cause pigeons to be able to breed almost out of control. Not counting the effects weather has on their ability to hatch and raise chicks, pigeons are eating, breeding, and pooping machines!

Speaking of poop, that’s the part about a pigeon that makes them such a nuisance because that’s where the dangers lurk. Dry pigeon poop can cause severe inflammatory responses in peoples’ lungs when inhaled and transmit diseases to people who have increased risk of getting sick like the elderly or people with immunodeficiency.

The two most common disease-causing fungi found in pigeon droppings are Histoplasmosis and Cryptococcosis and the most common disease-causing bacteria is Psittacosis. Catching any of these diseases is very rare, but their symptoms take over a week to develop and are usually similar to more common problems like the flu or pneumonia. It’s important to practice good hand hygiene and to avoid touching or breathing material from heavily contaminated areas.

I know that by writing all of this we’re probably educating our competition as well, but we feel it’s important for you, the customer, to understand that we know what we’re talking about and there’s no such thing as too much knowledge. Most of what we’re telling you here is available all over the internet, but actually finding, learning, and applying the relevant information to do this job correctly is all too rare.

We receive calls on a regular basis about nuisance birds and because of our years of experience we can advise you just by a description alone as to whether or not it’s a protected species, if it’s a temporary problem that will likely resolve itself (like European starling migrations), or if you do need professional help.